I suspect that not many people noticed there have been a small number of articles in fairly well-known media over the past several months about the Phil Campbell convention, the 2nd of its kind, planned for June 17 and 18th this year in the town of (can you guess it?) Phil Campbell, Alabama. Here’s what appeared in the WSJ:

This quirky idea came from a Phil Campbell I am related to by marriage, that is, my brother’s marriage to Phil’s sister, Veronica. Phil and Veronica found out about and visited this small town in Alabama n 1994, and that discovery led to the the first Phil Campbell gathering in Phil Campbell in 1995. All persons named Phil, Philip, Phillip, Philippe, Philipp, Philippa, Felip, Felipe, Filip, Filippo, Filippu, Filipe, Filype, Phylip, Phillep, Pilib, Fülöp, Fulup, Phyllis, Philice, and Philomena that our Phil could find were invited. 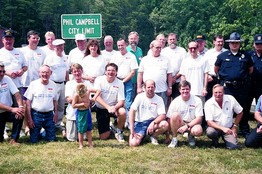 The 2011 event was planned to coincide with the 100th anniversary of the town. Hundreds of namesakes had been located and invited, including Phils from Australia and the UK.    Phil also invited  Jason Biggs, the Hollywood actor who plays him in the upcoming film “Grassroots,” as an honorary Phil Campbell. Jason will be there.

However, last month’s tornadoes hit the town of Phil Campbell very hard; 26 deaths were confirmed, the school and churches were demolished. Under our Phil’s leadership, the gathering of Phil Campbells quickly became a relief effort. The gathering will go on as planned, but the Phils, Philips, Phyllises, Felipes, etc. will show up ready to volunteer for rebuilding efforts, and with as large a check as possible to go to the relief and rebuilding of Phil Campbell, AL.

You can help, too. If you haven’t (or even if you have) already donated to support tornado relief efforts, you can do so on the I’m with Phil site. Let’s help the Phils make it a really big check.

When I wrote the “first SM” in my blog introducing The Four SMs, I added the note:

During this time I’ll also be mulling (and hoping for your ideas) on the shadowy “5th” SM — the networked, community, purposeful use of social media to bind networks, causes, and events. I just don’t have a name for it yet.

Both Lilia Efimova and Harold Jarche responded to my ill-formed request with blogs of their own, and suggested the terms Cause SM and Emergent SM, respectively.

Both of these helped gel my thinking, and I’m going with Emergent SM, because it can encompass:

So I’m defining this SM as the networked, community, purposeful use of social media to generate relatedness among crowds and emergent networks in support of ideas, causes, and events. It’s still a little mushy, but I just can’t go on adding categories forever and I need to acknowledge the ways that people are using social media to create networks.

An event, idea, or cause provides an attractor and social media enable a flow of conversation around it. These networks may be transitory, as in

Or they may be more permanent, truly cause-related as in the examples that Lilia gives: “political campaigns, citizen-led disaster response, charity/fundraising/helping others, working on attitude/legislation changes.” Using social media for causes has been championed, research, taught, and evangelized by Beth Kanter, who has just published, with co-author Allison Fine, The Networked Nonprofit.

Lilia emphasizes that we need to think about these networks in terms of complexity, as does Harold, who nails it with a definition of emergence from Esko Kilpi, which deserves repeating here:

Complex organizations are neither products of random experimentation, nor can they be perfectly designed beforehand  and managed efficiently top down. The Internet could not have been designed top down, nor can any living organism be planned from outside.

What is going on in these cases is called emergence. Interaction itself has the capacity to create emergent structure, coherence, consistency and change.

I had occasion to remind myself of the cycle of network creation and transition that I describe in Net Work. Networks can be purposefully and intentionally designed, but they can also emerge. Thus a transitory or cause related network can produce a significant enough attractor that one or more people will bring leadership to it, and, with proper skill, manage its context in a way that makes a difference in the world.

I still need to complete the rest of this series, with my commentary on the issues and challenges faced by each of the SMs. If you need a sneak peek, you may want to look at my updated slide deck on the 5 SMs.

I’m late, but haven’t forgotten my pledge to blog on Ada Lovelace day! I did include, in a talk that I gave this morning on social media, and to wish everyone a merry. I included the image above in my preso.

This year, I’d like to honor my own cohort in technology, and the many women I’ve worked with on the “support and services” side of technology. As many of you may know, I began my career in technology as a technical editor at IBM. IBM sent me to programming school in the 706 building in Poughkeepsie, New York, for a total of 24 weeks one long winter many years ago. On completion of my training in software programming, I was offered a choice of jobs: as a programmer, or as a writer. The programming manager was really up front: the job he had was pretty boring, nuts and bolts stuff. The writing manager offered me the opportunity to develop users’ guides and to put my stamp on how I thought technical writing should be done. Guess you know which path I took. (Well, I did do some engineering later on, but only to advance technologies in support of producing higher-quality documents.)
And I never looked back, even though I continued to work in an industry that valued the “real engineers” over those those who made the engineering products actually usable and useful. I’ve had the good fortune to work with people in the training and information sciences areas as well as in my native “documentation” specialty. These disciplines, like technical writing, were not dominated by women, but women were well represented in these fields, particularly in higher levels of management. They are the ones who have often been the singular woman on an all-male staff in a highly technical company, who have had to stand their ground often in defense of the value that their groups brought to the company, and who have made technology friendly. Curiously (or not) I have seen that these three fields — information sciences, technical writing, and training and development — have (together with consulting practices) provided fertile ground and expertise in the field we now know as knowledge management.
These women have been my role models, my mentors, and my friends. Today, on Ada Lovelace day, I salute them.

Today I am adding my voice to those who are rallying via blogs to protest the possible shutdown of the Boston Globe by its parent, the NY Times Co. If we were marching in front the NYT offices, carrying banners and placards, my would read: “Lead the revolution, don’t turn your back on it.”

Clay Shirky has written and spoken eloquently about the reasons for the demise of newspapers and suggests that perhaps “they had it coming” for not seeing the internet coming. But he also says, “Society doesn’t need newspapers. What we need is journalism.” And an environment — a social architecture — in which journalists can learn their craft from masters. Newspapers provide such an environment, and the Globe’s rich history of journalism awards speaks for the generations of apprentices who have become masters.

We are in the middle of a revolution, and the economics of running a newspaper in a time when people can get their news from the internet are stark. The old business model is not affordable, but that doesn’t mean we should shut down the business — we need creative thinking of the kind that wins journalism awards to design a new model that gets the news to the online masses as well as provides investigative reporting, reflection, and context.

A friend once told me about a science fiction book he’d read. Post apocalypse, in a world bereft of information and telecommunications technologies, knowledge was passed only from person to person. One day, a character perhaps like our modern Wall-E digs through an ancient garbage dump and discovers a new technology that will bring this distopic society back to light: a pencil.

My Ada Lovelace day tribute is to the inspiring Anita Borg, who was committed to bringing women into the field of computer science and whose work continues at…

In 1987, I was part of a small group of women in the software engineering group at Digital Equipment Corporation who were convened to work with Jean Baker Miller and colleagues at Wellesley College’s Center for Research on Women. Sometime during that fall, one of our group returned from a computer systems conference on the West Coast talking about how all the women at the conference (perhaps a little more than a dozen) had all had lunch together one day. Among those women was Anita Borg, who founded (from there or around that time) the systers list. Mailings from the list animated my days at Digital, as the postings ranged from the technical questions, to career support requests, conference room sharing and ride information, and into the deeply personal.

It was not a happy time for women in engineering. I had fared somewhat better, though I was not a software engineer per se and had been given many opportunities. As a “senior consulting engineer,” the first women from the documentation/information architecture field to be granted that title, I sat on the review board that approved candidates for promotion to senior positions in engineering. Anita was one of the few women engineers in these coveted positions.

She talked about the need to bring women into engineering every chance she got. But people weren’t always listening. I talked to her at an awards ceremony at which she was due to speak, sometime in the late 1980s or early 1990s, before Digital crumbled. She had prepared remarks directly focused at a number of senior managers in Digital who were present. However, one of them had earlier apologized that he would not be able to stay to hear her speak, because, Anita reported blood pressure rising, he had to “walk his dog.”

That is as as good a sign of those times as any. Thanks to Anita and her vision, the world has changed, but I think we are still not as far as we could be. And what could be? Jean Baker Miller, herself an inspiration to many women for pointing out at a time when it was not politic to say so, that “women are different from men.” She firmly believed that if women were designing the computers and applications that were becoming such an integral part of our lives, that the world would be very, very different.

I also blogged about this some time ago.