Enterprise 2.0 is in Boston next week. Since my press pass was approved, I’ve received emails from a number of vendors who’d like to talk to me about their products. Many of these emails refer to their products as platforms. I’m intrigued about platforms, not because I don’t understand the term, but because since reading Steven Johnson’s Where Good Ideas Come From: The Natural History of Innovation

, I’ve been thinking about the term in a different way. 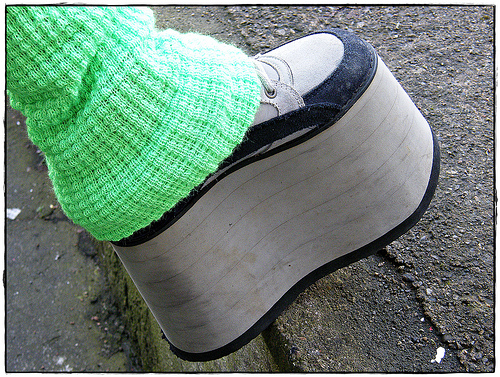 Let me start with the term. Platform. Railroad platform. Platform shoes. Platform bed. Diving platform. Political platform. Speaking platform. From the French, plate-forme, diagram, map, literally flat form (Merriam-Webster). The use in computer technology derives from the sense of a platform as a set of architectural standards consisting of hardware, operating system, and applications that provide the basis for a stable and (presumably) long-lived computing environment. A recent Economist article celebrating IBM’s 100th anniversary attributes IBM’s success to its ability to migrate itself (and more importantly, its customers) from one computing platform to another. Microsoft, Apple, and Google provide competing platforms on which to build information systems and applications.

In his landmark article, Enterprise 2.0: The Dawn of Emergent Collaboration, Andrew McAfee used the term platform 31 times referring to the online intranets, external web sites, and bespoke applications used for “generating, sharing and refining information.” A month or so later he elaborated on this definition of Enterprise 2.0 as “the use of emergent social software platforms within companies, or between companies and their partners or customers,” and fully defined his use of each of those terms: “Platforms are digital environments in which contributions and interactions are globally visible and persistent over time.”

The notion of visibility resonates with some of those other platform-y items: diving platforms, speaking platforms, even political platforms all suggest something that is distinct, somewhat above and differentiated from the fray. The emphasis on contributions and interactions doesn’t suggest the vertical aspect of platforms. I especially think of a diving platform: you climb it or climb onto it and from it, launch yourself into an immersive experience. But I also think of the platform as a place on which to stand, a place from which to move more creatively.

Steven Johnson evokes this aspect of platform. He sets the scene (as he does often in his book) by talking about Charles Darwin’s discovery of the coral atolls in the Indian Ocean. The coral ecosystem, initially structured on volcanoes submerging over eons, continues to build upon itself, a platform on which to build the next layer, always becoming, always emerging from what came before. He extends the metaphor, also, to computing systems and applications noting that even Twitter itself is a platform on which innovators continue to build and extend. “Emergent platforms derive much of their creativity from the inventive and economical reuse of existing resources,” he says, linking the notion of building upon and re-using to the way that city neighborhoods shift over time, as buildings are reclaimed, re-purposed, and re-occupied. 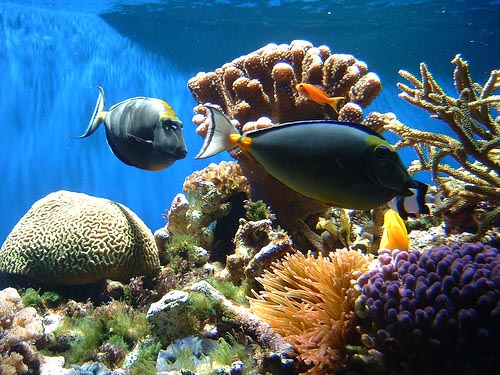 I really like the image of the collaborative platform as a coral reef, a rich ecosystem of people and ideas both using and building on the platform, contributing while they interact. Big schools of small fish, small schools of big fish, eels, crabs, and skates; rainbow fish and clowns; shy tetra and angels and sergeants finding their way, their food, their friends among the diversity of coral. And, like the Chihuly sculpture I mentioned in my recent post, the result is always unpredictable, but within the context of of a set of boundaries and constraints, designed for emergence.

One Response to On the Platform