Doug Engelbart passed away last week, and there have been modest acknowledgments about his passing, and his accomplishments, among which, of course his most famous — the invention of the computer mouse. (The Economist had a nice obituary, too.)

The mouse was an element of Doug’s vision for how humans and computers could co-evolve to increase the intellectual potential of individuals and groups. Being able to interact with the computer and with others through the computer and becoming more adept at doing it was merely a hardware element.

I became familiar with the vision and much, much more, when I attended one of Doug’s Bootstrap Institute’s 3-day seminars at Stanford in March, 1991. Three days with Doug Engelbart did, I am sure, change many more lives than mine. He introduced a full new way of thinking about work in organizations and used language that today could fit into any knowledge management treatise, for example:

Giving knowledge workers new capabilities for coordinating their work concurrently, with instant access to the correct document, and all the supporting intelligence and dialog trails which led to key decisions, could dramatically reduce product-cycle time and improve first-time quality, boosting an organization’s capacity and momentum. (This text is from my hardcopy dated 11/5/90. Updated version is available on the Douglas Engelbart website.)

His approach for enhancing organizational effectiveness was the A-B-C model, in which the core business work is the (A) activity, and (B) activities were those in service of improving (A) through training, implementing new processes, introducing new tools, and the like. The third level, (C) activities, were those activities focused on getting better at learning, researching, finding, and figuring how to acquire and share the knowledge necessary for improving (B) so as to enhance (A).

He believed that (C) activities were in the main non-proprietary and could and should therefore be work that could be a collaboration across businesses and industries. He attracted many people to the Bootstrap Institute (which has since been renamed the Doug Engelbart Institute) to work together to create this (C) community. And because so much of his vision was tied to the use of computing infrastructure, he sought the support and attendance by many in the computer industry. I was invited to attend because there were several senior people in Digital Equipment at the time who were interested in participating in the effort.

Three intense days included time in Doug’s education lab (the first time I had ever participated in a training session in which all participants had computer screens to view and follow along the instructor’s screen), lots of “foils” (as they were called in that day, no screen display of powerpoint yet!) that expanded on the various elements of Doug’s theory of augmentation and the different cultural, organizational, and systemic ramifications… and lots of interesting people. Below is our group photo. Over 14 different computer hardware and/or software companies represented. 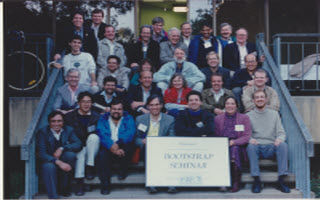 Not much really happened with the Bootstrap Initiative as, like most of Doug’s work, he was ahead of his time and probably not a great salesmen nor business thinker. For human augmentation to really work well, computers needed to be interoperable — information from one computer system had to be accessible from any other — but  we were some (not a whole lot, but enough) years away from the environment we live in now with rapid publishing to the web, almost universal sharing through HTML and document publishing standards. All of which made knowledge management possible.

The Bootstrap seminar was one of the first formal intentional network building events I ever attended. Doug was very clear about how important it was for us to get to know each other and that the development of these relationships would make or break the Bootstrap endeavor. At each break, he instructed us to “talk with someone you don’t know or haven’t met yet!”  Not much came of the network, either, but that was possibly also because we didn’t yet quite have the technology for all these people in all these companies to have communications tools so we could communicate in a style that was comfortable for each of us. (Or, the purpose of the network wasn’t sufficiently articulated; or, there wasn’t enough structure for the network to collaborate; or we weren’t sure what the value of this network would be to each of our respective companies. Wish I’d known more back then.)
RIP, Doug Engelbart, and thanks for the gift of many concepts and a language that I believe has served me well.